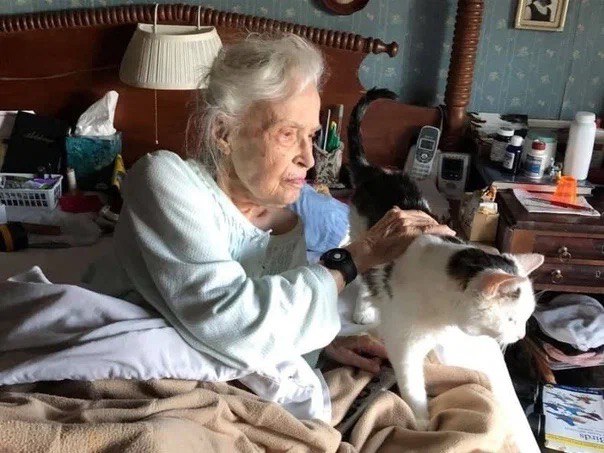 19-year-old cat Gus lived in a shelter for a long time. The employees no longer hoped to find a new family for such an elderly pet, they were sure that the cat would meet its last days under their care. Age also affected the health of the animal, which made his chances of finding a family completely illusory. For several years of Gus’s stay in the shelter, no one was interested in him, but one day the employees were approached by people who came to see the oldest of all the wards of the institution. 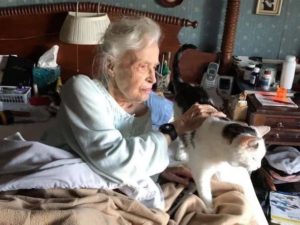 People came to the shelter at the request of their mother Penny, who is 101 years old. A woman recently lost a cat that was her only friend. Penny was old, she hardly moved, and for many years the cat was the only living creature that was always around.

The loss of a pet was a serious test for Penny, her relatives could not comfort the woman, but one day she asked them to bring her a new cat from the shelter, setting only one condition: the animal must be as old as she is. Soon, Penny’s children came to the shelter and conveyed their mother’s unusual request to the staff. 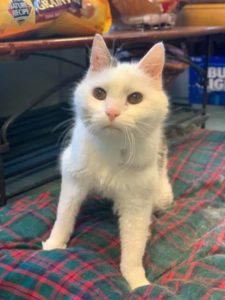 Employees immediately realized that this was the only chance for Gus to find a home and took visitors to get acquainted with their elderly ward. On this day, Gus went to his new home, however, the shelter staff and Penny’s children agreed that for a start the cat would be on a trial period, which would make sure that Gus and his new owner get along.

Gus spent several weeks at Penny’s house, during which time it turned out that they get along very well. Both the woman and the cat spent most of the day watching TV and sleeping. When the trial period came to an end, the native women returned to the shelter and completed the paperwork necessary for Penny to become Gus’s mistress. The woman admits that she managed to sincerely love the cat, and is also glad that now they will live together, delighting and supporting each other.