Gone on vacation in the Somme, Blanche’s owners had desperately looked for her everywhere after she ran away, before having to return home to the Paris region without the cat. A beautiful white cat – hence her name – was found and returned to her family from whom she had been separated for 3 months, reported the Journal d’Abbeville et du Ponthieu-Marquenterre.

Last summer, the couple from Paris spent their holidays in Fort-Mahon-Plage, a seaside resort in the Somme, with their cat. Everything was fine until July 18, the day the animal escaped. Her humans had tried everything to locate her, but their efforts were in vain. It was therefore reluctantly that the Ile-de-France residents had to resolve to return home without the feline.

Blanche’s absence and the uncertainty about her fate were extremely difficult for her owners. The cat, too, must have been confused and terrified without her family and away from home. Despite everything, his masters tried to keep hope alive. The news they so longed to hear finally arrived 3 months later. Sabine Michel, founder and president of the Free Chats of Fort-Mahon-Plage, contacted them to tell them that Blanche was at the association’s shelter. 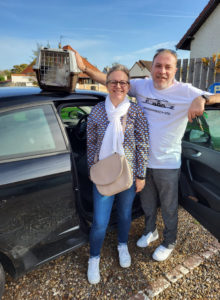 She had just been picked up after her discovery at a campsite, about a 30-minute walk from where she disappeared. The veterinarian then passed it to the identification chip reader, which allowed Sabine Michel to obtain the couple’s contact details. All he had to do was call him. The cat was “generally in good health”, according to Sabine Michel, although having lost weight and presenting “some sequelae on the ears”.

“Thank you to all the people who intervened so that this pretty kitty finds her home! “, can we read in the Facebook publication of the Association des Chats Libres de Fort-Mahon-Plage. A post including the photo of the reunion…

Homeless man asks for a piece of cake for his birthday: the hairdresser gives him a new look and dinner at the restaurant
Certainly, it is certainly not the benevolent gesture of a single individual that will erase poverty
LIFE STORIES 0 38