A quartet of volunteers had to carry out a fairly complex night rescue after being informed of the presence of a cat and her 4 kittens in difficulty under a building. Retrieving the parent to reunite the family proved even more tedious. 4 week-old kittens and their mother were rescued after becoming trapped under a residence, MBNews reported.

The facts took place on Thursday, October 13 in Monza, near Milan. That evening, residents of a building in Valsugana street, in the Lombard city, had noticed that a cat and her babies were stuck in a hole under a balcony on the ground floor. Residents called for help. Lara, an agent of the local ENPA (Ente nazionale per la protezione degli animali – National organization for the protection of animals) intervened. She was joined by 3 volunteers, Milena, Daria and Elena.

They had to crawl under the balcony to pick up the young cats, about 3 weeks old, but couldn’t find their mom. They left the premises after midnight, not without installing a trap cage with food to attract the animal. 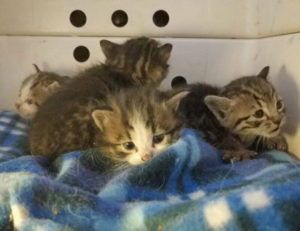 The next morning, the volunteers came back and the cat was fine in the cage. She was taken to the shelter, where her kittens were waiting for her. The family was complete again. 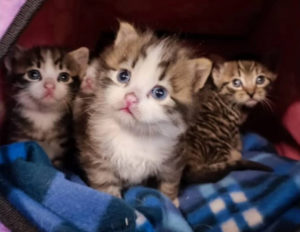 The mother was called Polentina. Her young, 2 males and 2 females, were named Ragù, Pesto, Norma and Gricia. As soon as the kittens’ age allows it, they can be offered for adoption, just like their mother.