Dirt was born amidst soot and sludge, and it’s been there all its life. The railway workshop is his home and he has no intention of leaving it. This cat has also become the unofficial mascot. The Nevada Northern Railway Museum exhibits and operates old steam locomotives that played an extremely important role in the history of this western US state. The museum has its own maintenance workshop, where these old machines, some more than a century old, are kept alive and presented in their best light.

The workers and technicians who work there have a friend like no other, living on the premises. This is Dirt, a male cat whose white and red coat is blackened by soot and grease. Its benefactors clean it regularly, but they don’t just do that; they feed him, play with him, pamper him and take him to the vet every year. The senior feline is, in a way, the mascot of this workshop located in Ely, in eastern Nevada. 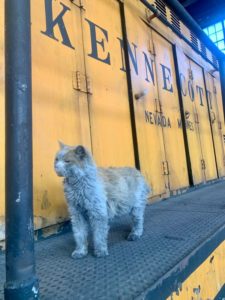 Dirt has only known this environment since birth. 15 years ago, a stray cat snuck under the railroad snowplow and gave birth to a litter of kittens. She then left with her little ones, but chose to leave Dirt behind, reports Trains.com. The employees had discovered it hidden in a siphon. They had managed to lure him out of hiding with a can of tuna. It has remained there ever since. 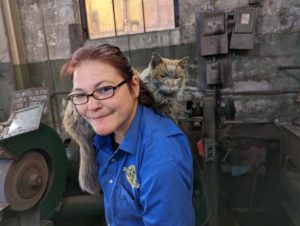 The presence of this cat is also totally in line with the tradition of the American railway sector, since, in the past, they were often found in maintenance workshops where they were responsible for chasing rodents. Dirt is busier lounging here and there and welcoming visitors than chasing after mice and rats.

The train museum is his home, and the maintenance staff is his family.