Having become too imposing in the eyes of the family who had adopted him a year and a half earlier, a dog was brought back to the shelter despite all his qualities. This return to square one was extremely difficult for the canine, but his story went viral, which gave him a second chance. 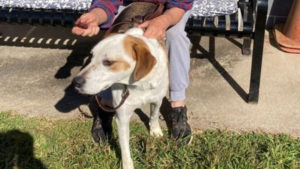 Lucky found a loving family after being brought back to the shelter following a failed first adoption. A story reported by The Dodo.

Lucky is a Beagle cross that does not lack qualities. At The Green County Animal Shelter of Virginia, based in Ruckersville, Virginia (Eastern United States), it is described as the perfect family dog. Friendly, walking on a leash to perfection, getting along wonderfully with his congeners, cats and children, the quadruped has everything to please.

In March 2021, he was still a puppy when he was adopted. At the time, his owners wanted a medium-sized dog. As they grew into adulthood, Lucky grew to a much larger size than they expected. They ended up parting with the animal in September 2022 and bringing it back to the shelter. The disappointment was extremely hard to bear for Lucky, who remained sadly in his corner. 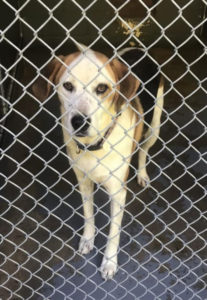 “We are so heartbroken for Lucky, because he is struggling to become a shelter dog again,” said the reception structure in a Facebook post which proved to be decisive.

“Lucky really suffers because he was loved by his family”, could we also read there. The author of the publication then asked Internet users to share a message: “Lucky needs each of you to help him find happiness by being loved by a family”.

The call was heard and the post quickly went viral. A few days later, a family came to meet Lucky at the shelter. It was love at first sight, and the adoption was formalized.

“Lucky found his new forever family today! It was enough for a family to fall in love,” announced The Green County Animal Shelter of Virginia on its page.

Homeless man asks for a piece of cake for his birthday: the hairdresser gives him a new look and dinner at the restaurant
Certainly, it is certainly not the benevolent gesture of a single individual that will erase poverty
LIFE STORIES 0 39