Violet has come a long way, both physically and mentally. She had indeed suffered acts of cruelty with a pellet gun which led to the amputation of her leg. An unprecedented trauma that the members of the shelter are trying to make him forget. 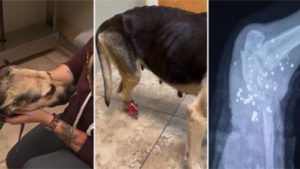 Violet is a young dog who has overcome her ordeal. The unfortunate woman was picked up by the association 716 Paws Rescue after being found by a man in a deplorable condition in a rural area of Texas in the United States.

Violet suffered from an open wound on her right hind leg. She was therefore rushed to the Family Animal Hospital veterinary clinic in the town of Friendswood.

The animal doctor, calling himself Dr Zoo, performed an X-ray which revealed the extent of the damage. 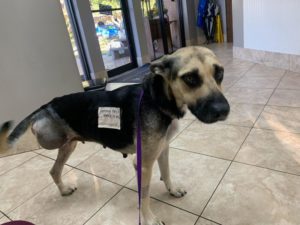 The damage was such that Violet’s limb had to be amputated as soon as possible. It was essential to prevent an infection that could have cost him his life.

“She is a real resilient. She was a bit shy at first. She used to duck when people put their hand near her face or head, now she leans towards them for cuddles,” Dr Zoo said.

The volunteers of the organization regret that no one has come forward to recover Violet. She was obviously abandoned after undergoing this torture. 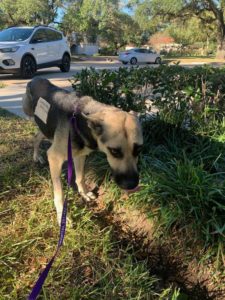 Violet is still recovering in the animal hospital. According to her caregivers, she is making tremendous progress day by day. She moves with ease and shows a whole new vitality thanks to the painkillers provided.

In addition, she reveals her small endearing personality.

Violet will be offered for adoption when her health condition allows it. In the meantime, she enjoys the affection of her benefactors.