A resident of Bouches-du-Rhône was to appear for acts of abuse on his dog reported last February, but he was absent in court. He was nevertheless sentenced to a fine and to pay damages to the civil parties. The canine is in good hands. 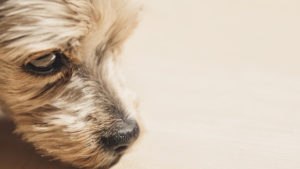 Narrowly saved as he was left to fend for himself in the wild after his abandonment, a dog victim of abuse was cared for by the SPA. Its owner was recently sentenced, reported the Dauphiné Libéré on October 13.

In February 2022, a Yorkshire terrier was discovered by hikers on the Valensole plateau in the Alpes-de-Haute-Provence. The animal was in a worrying state of health; he was skinny and had a major wound on his neck. Supported by the SPA of Baux-de-Provence, his identification chip had been detected. It was then a question of finding his master. The latter lives in Roumoules. Aged 43, he was already the subject of an investigation for ill-treatment after the reports made by the SPA of Barcelonnette.

Daniel Meyssonnier, president of the SPA of Baux-de-Provence, indicated last June that the quadruped was severely dehydrated at the time of his discovery, in addition to his injury.

The trial was held at the Digne-les-Bains police court. The defendant did not show up, still according to the Dauphiné Libéré.

The 40-year-old was eventually found guilty and fined 400 euros. He will also have to pay more than 1600 euros in damages to the animal protection association, as well as 500 euros in legal fees. The Yorkshire terrier, which was taken from him, is still at the SPA shelter, which will now be able to offer him for adoption.

The man could not abandon the emaciated and dehydrated dog
Barilla was taken to a shelter when she was just under a year old.
ANIMALS 0 24

A look that conveys all the pain and grief: the dog realized that he had been betrayed and abandoned
As soon as this video appeared on the network, it immediately became viral. In
POSITIVE 0 4

People drove the dog from the bus stop, not even letting her hide from the rain
A beautiful and kind dog named Sheila ended up on the street at the
ANIMALS 0 26

On her 101st birthday, her grandmother asked the children to bring her the oldest cat from the shelter
19-year-old cat Gus lived in a shelter for a long time. The employees no
ANIMALS 0 3