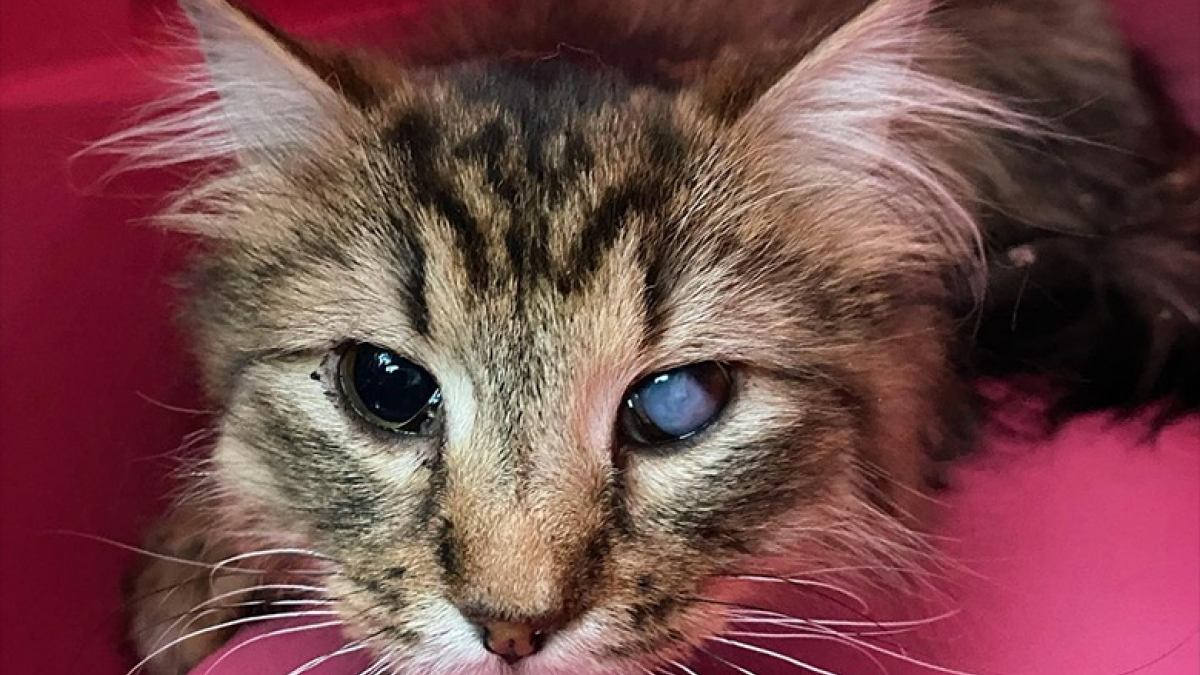 Stray cats are a scourge the world over. The poor beasts lack food and care. Thanks to the dedication of invested associations, some have the opportunity to take advantage of a new chance. 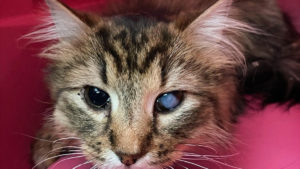 A couple living on a farm not far from Montreal in Canada saw their estate turn into a haven for abandoned cats. The man and the woman did their best to provide care and feed the growing number of felines, but the task proved to be very complicated as their population increased.

They therefore called on the association Chatons Orphelins Montréal to help them. Céline Crom, who was part of the rescue group, told LoveMeow: “Some of the cats were sick and others were injured due to fights.” 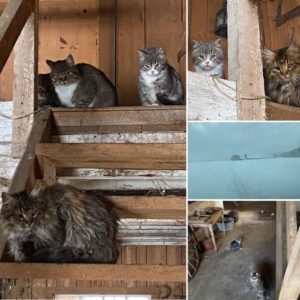 Among the troop, there was a young cat named Remille. The unfortunate cat had a totally cloudy eye, skin on her bones and very matted coat. Julie, another volunteer from the association, therefore took her to a safe place. “She weighed barely 1.3 kg,” added the young woman.

The visit to the vet revealed that Remille had a corneal ulcer. She was also FIV (Feline Immunodeficiency Virus) positive and pregnant. Nevertheless, the mom-to-be was determined not to let her health problems taint her new life.

In a few days with her foster family, the 8-month-old cat recovered. She doubled in weight and her messy fur was a distant memory thanks to the efforts of Céline, the volunteer who picked her up.

Remille gave birth to 4 kittens 2 weeks after her arrival. Unfortunately, her life outside had caused too much damage to 3 of the babies, who did not survive. Hardy, the little survivor, has grown up well and given his mother a taste for life. 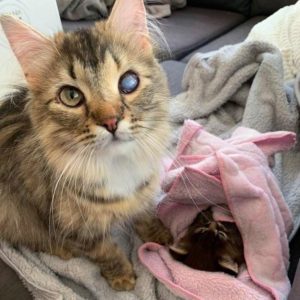 “Hardy the solitary kitten becomes very active and curious. He has figured out how to groom himself and is learning to play by imitating his mother,” Celine said. As for Remille, she has turned into a more than affectionate cat: “After months of trying to survive on the outside, Remille is so happy to be in a safe house, to be loved and spoiled”, she added. When she the mother ans the son are completely recovered, both can be adopted into a caring home.

Labrador started living in someone else’s entrance and walked himself. But people put him on the street at -27
In December, a black Labrador appeared in one of the sleeping areas of Kursk.
ANIMALS 0 11

I began to feed the street dog, and he began to pay me back
When I was growing up, there were several stray dogs in our yard and
ANIMALS 0 16

On her 101st birthday, her grandmother asked the children to bring her the oldest cat from the shelter
19-year-old cat Gus lived in a shelter for a long time. The employees no
ANIMALS 0 3