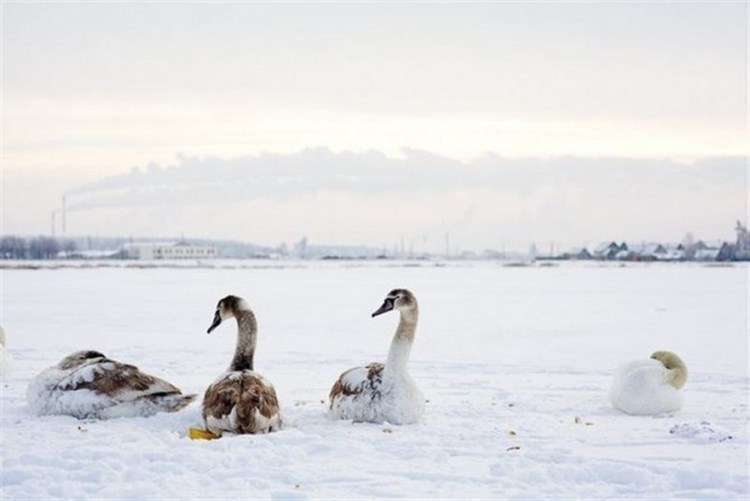 This pair of swans had babies much later than usual. By the end of autumn, five chicks did not have time to grow and get strong enough to fly to warm countries, so they and their parents stayed in the pond for the winter. Swans tried very hard to warm and protect their babies, but before the coming winter brought cold, they were powerless. 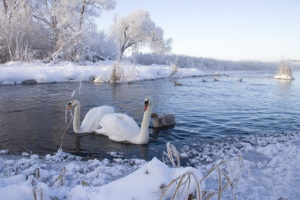 The family was able to hold out on their own until February, but then the temperature became critically low, the water in their pond was covered with a thick layer of ice. The birds could no longer provide food for themselves and their children, so in search of help, they went to a nearby village. 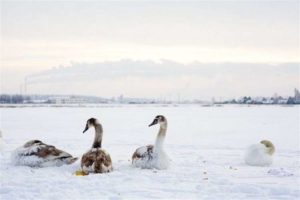 Local residents did not leave the birds in trouble and began to feed them, but they could not find a place for wintering. People connected the press, applied to different zoos, but no one wanted to take care of 7 birds at once. While the zoos refused, explaining that they had no money to support such a large family, a local resident came to the aid of the birds. Lyudmila has several restaurants located in the area, as well as her own greenhouses, in one of them she offered to settle the birds. The swans began to live in a greenhouse and eat leftover food from the restaurant, as well as frozen fish that a woman brought them. 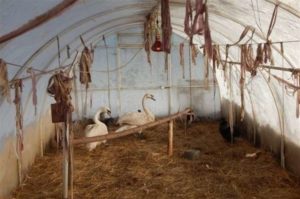 In just a couple of weeks, the birds have changed beyond recognition, because they no longer had to wage an exhausting struggle for their lives. In the flock, all the swans, except for one, were white, the black swan stood out among them very much. As it turned out, this bird was the very first to appear on the pond. 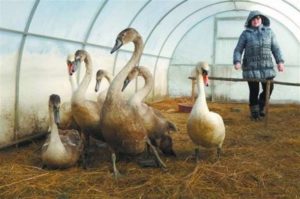 A pair of white swans and their babies appeared later, at first there was a tense relationship between them and the stranger, but over time they accepted him into their family, because he could not survive the winter on the lake alone. the black swan was marked with a special ring on its paw, so people knew that it had flown in from Riga.

Lyudmila took care of the swans, while she understood that in the spring they would most likely fly away, but the woman was not going to create any obstacles for her wards.

Other animals live next to the swans in the greenhouse: domestic chickens and ducks, and even a small pig. all animals easily found a common language and get along well with each other.