This shadow in the night within the cemetery could have frightened the guards of the place. However, they know from experience that stray dogs are used to coming to seek the tranquillity that reigns there. So they did what was necessary to help him. 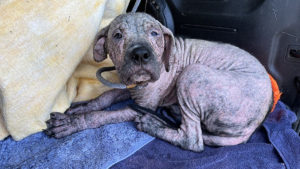 On September 1, 2022, the team of a cemetery in the State of Missouri in the United States saw a canine silhouette passing by in the middle of the night.

The next day, they went in search of the intruder who had obviously come for help. It was indeed a puppy in a disastrous state of health. He had no hair and had difficulty walking.

The Good Samaritans called on the Stray Rescue of St. Louis (SRSL) association to help him get the care he needed. At the same time, they fed and pampered the unfortunate.

A few hours later, Donna Lochmann, rescue manager at SRSL, arrived with her team. They took a few minutes to find the puppy who had taken refuge under a bush, then took him to the veterinary clinic. 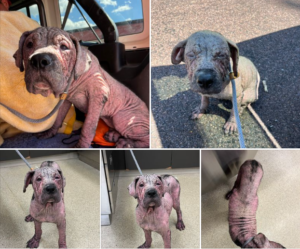 The baby was named Kamper after the headstone he was standing in front of when he was found.

The animal doctor diagnosed the young canine with severe mange. He also healed his leg wounds.

Kamper was therefore able to recover quietly at the shelter. The volunteers treat him daily with therapeutic baths aimed at eradicating the mites and relieving his itching.

Kamper’s hair grows back slowly. At the same time, he regains his joie de vivre and his joviality. 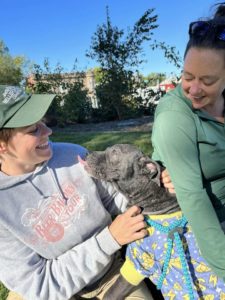 The cemetery team was very touched by the story of the young dog. The members of the shelter therefore organized a meeting one month after the rescue.

“It was really emotional for everyone, especially for Kamper and the volunteer who called us,” Donna told The Dodo.

The doggie has indeed warmly thanked his rescuers with his most beautiful licks. They were then able to wish each other the best for the future and say goodbye as it should.

Kamper has since moved into a loving foster family. He will be offered for adoption when he is fully recovered.