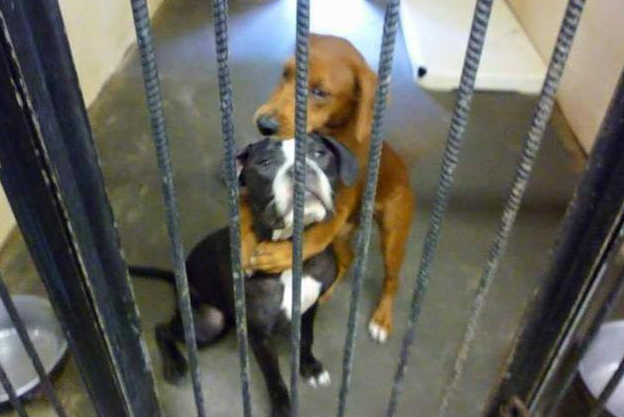 Mira and Callie are two dogs who met at a shelter. Here they lived for many years, all this time none of the dogs managed to find a family, and the employees stopped hoping that the animals could find a home. It was decided to euthanize the animals and, while waiting for the vet, they were moved to a separate cages.

Mira and Callie seemed to sense that something bad was waiting for them, as they weren’t resisting, moaning or barking, they decided to prepare for their fate and say goodbye. A few hours before the vets arrived, the dogs were sitting close together, from the side it looked like they were hugging each other tightly. 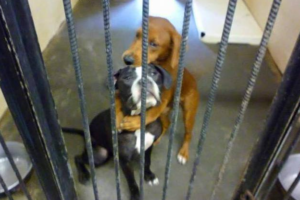 This photo touched people, they took several pictures of dogs and posted them on social media. In the caption of the photo, the volunteers wrote that the dogs only have a few hours left and that they urgently need help, otherwise this day will be the last.

The photo began to spread at high speed and very soon it caught the attention of a man who immediately arrived at the shelter and took Mira and Callie for overexposure. The man couldn’t leave the animals to himself, but he agreed to look after them while the search for the owner was underway.

Very quickly, there were people. Who wanted to take Mira and Callie forever. The dogs were welcomed by their best friends, so they not only found their own home and caring owners, but also often see each other on joint walks. 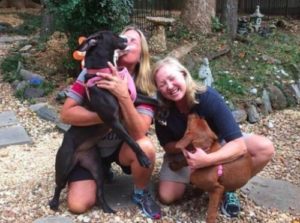 Dogs don’t remember that terrible day, because their life is filled with love and care. By adopting an animal from a shelter, you will give it hope for a new stage of life, and in return you will receive sincere love and affection.