Fishtopher’s photo had gone viral. She showed a face of great sadness, probably hiding a difficult past, but also an affectionate and friendly character. Thanks to the popularity he had with this shot, this cat no longer lives at the shelter. A cat has been adopted after photos of him revealing his sad eyes were widely shared, The Economic Times reported on Monday, November 28.

A snapshot posted on Twitter had moved many Internet users, both in New Jersey, where the male cat who appears there is, and elsewhere in the United States and around the world. The animal in question answers to the name of Fishtopher. He was described by staff at the Homeward Bound Pet Adoption Center in Blackwood as “very sad and depressed”. However, he had proven to be affectionate and friendly, getting along wonderfully with his fellow creatures and being close to humans. In addition to its tender face and plump appearance, the other great particularity of this tabby feline is that it does not like to eat alone; he only does this when someone is by his side.

The association said it had received hundreds of adoption requests for Fishtopher after the publication of his portrait. 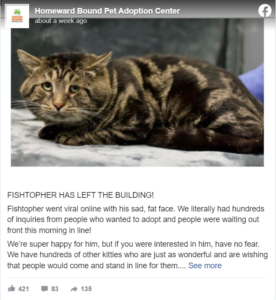 On Saturday, November 26, she announced the best news about her; the cat was adopted.

“Fishtopher has left the building!” “, can we indeed read on this Facebook post. We also learn that people lined up at the shelter to see the adorable quadruped and hoped to become its new owners.

“We are super happy for him”, continues the author of the publication, who wanted to recall that hundreds of other cats are waiting at the shelter to have a family, too.