Albie, by his nickname, had a hard past and was then abandoned. Unfortunately, he had to wait 5 long years before finally meeting his new perfect mistress. Today, the pooch is enjoying a sweet and joyful life. An adoption that moved the volunteers of the shelter. Albie is a Lurcher type dog. He was therefore born from a cross with a canine of the Greyhound breed.

The unfortunate was used for many years for hunting against protected animals. Which left him disfigured from a serious bite. He is indeed missing the tip of his snout. Fortunately, this damage does not affect his daily life in any way. He can therefore live quite normally.

The reason for his abandonment instead lies in the fact that he was simply not made to do evil. Albie is a canine described as endearing and adorable by the volunteers at the RSPCA shelter who took him in in 2017.

“He is also a victim of Covid. If someone had come to pick up a dog in person, they would surely have fallen in love with him because he is a very outgoing boy,” Anna White, the centre manager, told My London.

Unfortunately, he saw the years go by without anyone giving him a chance. Grace Ho, a woman residing in West London, England, was saddened by the death of her faithful 4-legged friend last April.

She nevertheless wanted to open the doors of her home to a new dog in need.

“I really didn’t have a pooch like Albie in mind, but when I saw his profile that said no one wanted him, it broke my heart. I think most people consider him a creepy canine because he’s missing part of his nose and has a lot of scars,” the Good Samaritan explained.

For 2 months, the duo got to know each other during multiple meetings during which long walks were organized. Albie finally moved into her new home in September 2022. 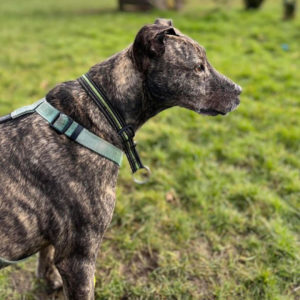 Albie is extremely grateful and has forged a strong bond with his overjoyed mistress.

“He’s a real gentle soul with humans and he smiles all the time. There’s obviously a lot to work on, but I know I can handle him, and he’s already made some great progress,” Grace said.

The dog has indeed some sequels of his past. He has become aggressive towards his congeners whom he still equates today with dangerous predators. Nevertheless, the positive education provided by Grace helps her to overcome this difficulty.