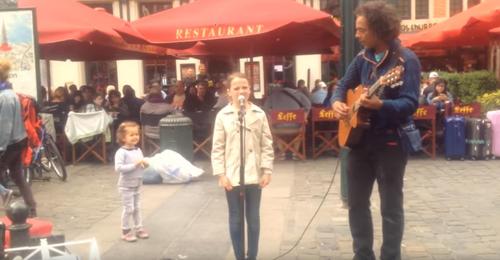 People at a local market in Holland were treated to a delightful performance over the past holiday. Patrons of a local restaurant patio were gathering in the middle of the holiday season when they were able to enjoy a spontaneous performance by Amira Willighagen.

The young girl won ‘Holland’s Got Talent’ in 2013 and her voice has only matured over time. It wasn’t a professional performance, but one she decided to do on the street. She may be young, but her voice is incredibly powerful and has a wonderful pitch range. 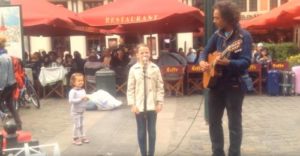 Amira, who is not known to revel in the attention, soaked up the performance with glee and bliss. She spent the entire song focused on the words, completely humbled by the audience watching and filming the performance.

Her truly modest demeanor humbled everyone around her and won her into the hearts of some onlookers. She chose to sing the famous classic “Ave Maria” and she absolutely blew the song out of the water, especially for someone at such a young age. She coordinated the performance with a local musician named Vincent van Hessen. He joined Amira playing his guitar. 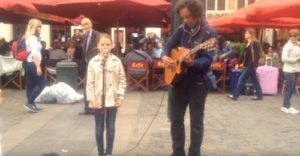 It was truly a lovely moment that strangers gathered to enjoy. It was a wonderful way for people to get into the holiday spirit and feel like those around them were friends, just strangers.

Have you ever witnessed an impromptu display of Christmas cheer? If so, let us know! We would love to hear your stories and for you to pass on this amazing story! Do you know anyone who will love this performance as much as we do? Then be sure to pass this article on to them as well.