The entire audience, including judges Alisha Dixon, Amanda Holden, David Williams and Simon Cowell, were so quiet that a fly could be heard in the audience as her performance began.

While many viewers were expecting something a little more subtle, they watched with excitement as she began to sing AC/DC’s hit Highway to Hell in true rock form. 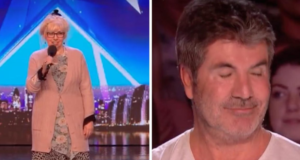 After watching her performance, the audience received the singer with a standing ovation. Jenny Darren has been singing since the age of 12 and listening to big names in music like Jimmy Page. At one point in her life, she even sang backing vocals for AC/DC and released four albums, featuring Iron Maiden drummer Nicko McBrian, as reported here by Radio Times.

After retiring, the Birmingham resident decided it was time to get back to what made her so happy in the past.